TECHNIG
Gateway for IT Experts and Tech Geeks

As noted earlier, C++ has three repetition, or looping control structures that allow you to repeat a set of statements until certain conditions are met.

Note: The variable that controls the loop is called loop control variable (LCV)

The first loop that we’re going to discuss about is while loop. The general form of while loop is:

In C++, while is a reserved word. Of course, the statement can be either a simple or compound statement. The expression acts as a decision maker and is usually a logical expression. The statement is called the body of the loop. Note that the parentheses around the expression are part of the syntax. 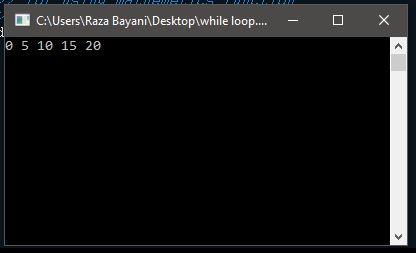 The general form of for loop is:

The initial statement, loop condition, and update statement (called for loop control statements) enclosed within the parentheses control the body (statement) of the for statement.

The for loop executes as follows:

The initial statement usually initializes a variable (called the for loop control, or for indexed, variable).

Concentrate on the example bellow:

This section describes the third type of looping or repetition structure, called a do…while loop. The general form of a do…while statement is as follows:

The output of the code is:

After 20 output, the statement:

“The end of Looping Control Structures in C++.

Top 10 Programming Languages that will Rank in 2018

This website uses cookies to improve your experience. We'll assume you're ok with this, but you can opt-out if you wish. Accept Read More